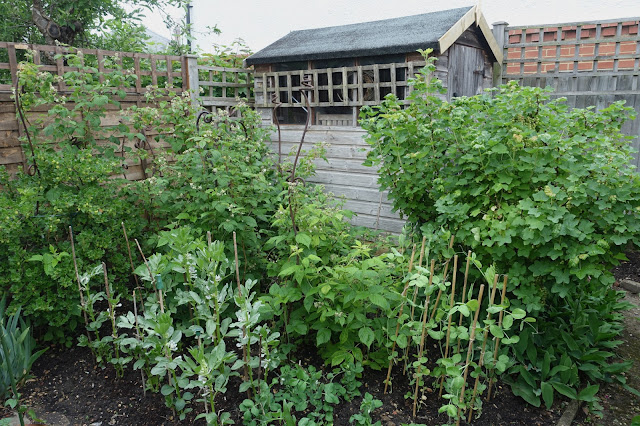 Having replaced most of the wooden fence and a "patch up" job on the shed, for the first time I am quite proud of the fruit and veg patch behind the greenhouse. At the moment it seems the only area that is vaguely under control. I cut some of the raspberries right back last year but they seem to be doing just as well as the ones I only hard pruned - an interesting experiment. The redcurrant bush is weighed down with fruit again this year and the red gooseberry seems happy although I can no longer think of it as a standard in shape! The three new blackcurrant bushes look healthy enough but are not going to bear fruit this year. The new blackberry is taking its' time to get going though, having put on hardly any growth. In the veg line I planted shop-bought seedlings of broad beans, Tom Thumb peas, a purple-podded pea variety and some dwarf yellow french beans. The 4 courgettes seeds and 12 purple climbing french beans I planted ALL came up. I learned about courgette plants last year so have already given 2 away! The first little pea pods are already well-formed on Tom Thumb so hopefully everything won't all come at once. In the greenhouse are 4 tomatoes (Sarah Raven mix - one failed so they refunded me £ 1.64p!!!) and a couple of chili peppers. Thinking about planting a cucumber of two since my trip to Cyprus where it appeared at virtually every meal - and why not!
Posted by sue in the garden at 16:29