Suddenly summer and thoughts on ants 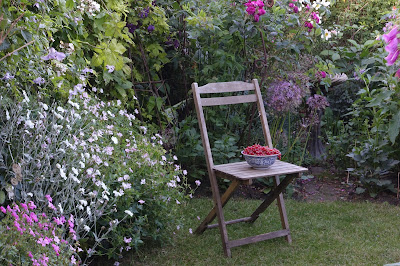 Having spent much of my free time picking a bumper crop of fruit this year (as evidenced on my Instagram page - sueatkinsonphoto) has left me little time to post! The hot dry spell has also meant enough watering - especially the French beans in the greenhouse. It seems 6 plants in a gro-bag are a bit too many and those in pots are doing better. But then I was expecting them to be a dwarf variety which didn't need staking and hence wouldn't be so overcrowded. The climbing variety are doing better - lovely purple beans. Neither have done well in the garden - I'm blaming slugs and snails.
The garden has flourished this year and without too much attention. There have been plenty of birds - particularly great tits, blue tits, dunnocks, robins, blackbirds and I'm delighted by the number of sparrows. The swifts are still here in good numbers, I have managed to count about 14 at once but it's quite a challenge as they move so fast. There are also rooks, rather more red kites than I would really like to see and I spotted a flock of starlings along the street the other day but I've not seen them in the garden. 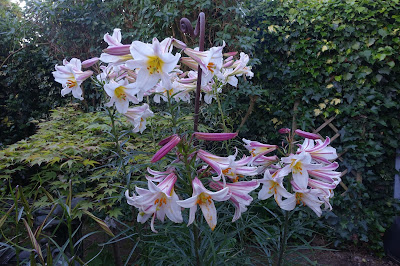 My Sarah Raven Lilium regale were spectacular but are now over as are the bulk of roses, geraniums and clematis although my very late spring cutting back of one of them was definitely a good move as it is still flowering, much later than usual. Two well-established phlox are doing really well. I am now eagerly awaiting the dahlias starting to bloom although they seem to be very slow so far....
On the radio they have talking about ants, claiming they do no damage. Hm. I'm not so sure. They have definitely been responsible for killing off several things here by excavating around plant roots. A splendid self-set white lychnis (left of top picture) upped and died suddenly last week and when I removed it there was virtually no root. Maybe or maybe not ants.... They are certainly farming black fly on the dahlias and that is not welcome.
One surprise observation I must note. The white perennial sweet pea (below) has been turning increasingly pink over the years and I assumed it was reverting. This year it is perfectly white again. Delight! 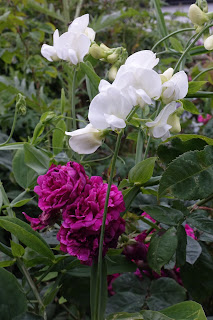 Irrespective of the last two posts, I have to share this rose and clematis combination with you. What my late Aunties would have called Russian ballet colours.... 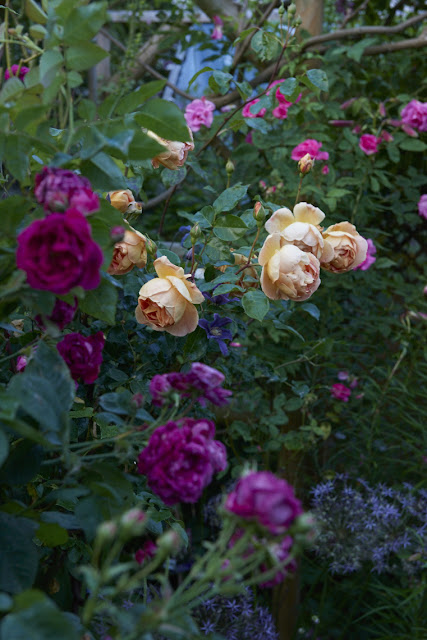 I am always tempted by climbers. They are great for filling odd spaces and experimenting with the annual varieties is great fun! Seduced by the beautiful display of Ipomoea (Mina) lobata I saw last year in St James's park, London, I ordered some seedlings from Sarah Raven and 8 lovely little plants arrived this spring - April I think!.
After a week or so I decided it should be safe to plant them out. Cautious, I only planted out 3, gave one to a friend and kept 4 inside in pots. Alas, the ones I planted out very soon succumbed to the unexpected late frosts. Looking a little sad and straggly I put my remaining 4 outside to harden off in early May. One was attacked by snails and proved insufficiently strong to recover so I brought the other 3 back indoors. They did not flourish - the leaves became distorted and pale and the plants grew straggly. Reading about them it seems they do not like rich living so I transplanted into rather poorer garden soil than the compost I initially used. I popped 2 in the greenhouse and they began to flower almost immediately with hardly any leaf/stem growth. Another I put in a window box with some petunias.
I am watching and waiting eagerly. Here is a picture of the healthiest when first transplanted. I will report progress - hoping for the best. Any advice very welcome! 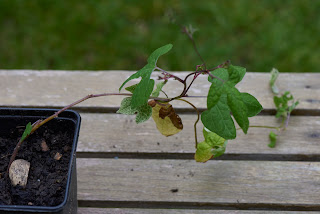 We have had so much rain recently that water accumulated in places it never had before. In a ceramic pot base, which is sealed at the bottom, some dead leaves had fallen and begun to decay. Among them I noticed a collection of mosquito larva but also some much larger really rather disgusting-looking white/transparent maggot-like creatures with long rat-like tails - commonly known as rat-tailed maggots!. It seems they are either Syrphid or Hover fly or Drone fly larvae. Either way, I'll be glad when they hatch out and fly off! Fascinating none-the-less.... 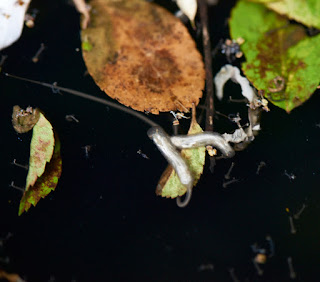 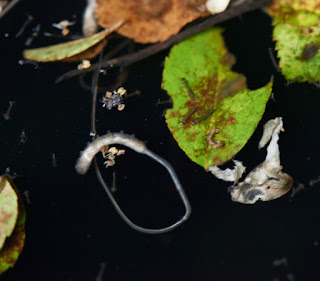