A robin at Easter 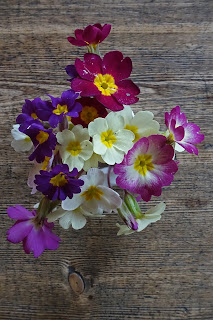 Not many things worth photographing just now but I am enjoying a little pot of primroses and polyanthus and some of their self-set hybrids!
Since the weather has chosen to throw us a mix of March and April excesses this weekend it's been a matter of making the most of the quiet patches. Friday's objective was successfully achieved with the joint-exercise of severe pruning my neighbours' huge shrub(?), although not without incident as one of them managed to fall, dramatically, off a step ladder - it going one way and him the other. Fortunately no harm was done! I now have much more light on my virtually "bald" grass patch (no, no photos!) and having sewn a third batch of expensive shade-tolerant grass seed I am really hoping for some more promising results (although I am beginning to suspect the whole process is more of a very expensive bird-feeding exercise!).
Before the rain began on Saturday I re-established two of my Diana Roles bird baths which were almost immediately put to good use and are now virtually filled with rainwater. There has been plenty of bird activity including the blackbirds which may or may not be planning on using a nest they've built near the house, a pair of goldfinches, plenty of blue tits and great tits and there have been regular visits from a coal tit, for the first time in ages. Most intriguingly a robin has been hovering and going in and out of the (unpopular!) ivy covering the boundary fence. At first he/she/they seemed to be visiting many different spots and I thought they might be after insects but today's activity has included transporting nesting material, including a large laurel leaf almost the size of the little bird which actually proved a bit too unmanageable! I hope they succeed with their attempts as it would be great to watch them so near my kitchen window.
Saturday's lull also enabled me to do a fair bit of tidying up dead plant-matter and pot up some lilies and dahlia tubers. Running short of other hole-blocking materials I made use of some large ivy leaves. 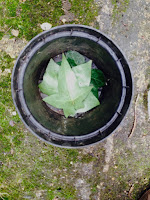 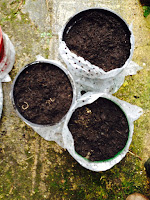 I am also experimenting with a new means of ID. It seems the pots will just fit inside the named bags the dahlias arrive in. With a bit of luck I might get my colour-balances right this year although with a unidentified few tubers which seem to have survived in the shed from last season it won't be all that predictable.

I've just received a (birthday) box of J Parker's dahlia tubers - Wittemans Best, Apache and Dark Spirit. A great incentive to clear the greenhouse out and start potting up! I find it's definitely worth starting dahlias in pots - they come into flower much earlier and it's far easier to protect them from hungry (or just greedy) slugs.
Posted by sue in the garden at 13:51 No comments:

I had my first serious gardening session of the year yesterday, making the most of the fine weather. The main objectives were to tidy the bay hedge and everything that's now growing through and over it (ideas which seem great but actually need a lot of control!), tidy the path and terrace and have a review of the overall situation. I'm trying to keep the hedge at a manageable height which will mean more trimmings but should involve less teetering at the top of the step ladder. So far so good. There is still some moss to clear from the terrace but it looks much better, especially removing unwanted seedlings from between the bricks.
I was accompanied in my scraping and sweeping by a robin - or robins, a pair were darting about the garden later. I also discovered a new blackbird nest in the bay nearest the house and they are busy back and forth as I write. I am always wary of clearing too much so early in the season as I like to leave nest-building materials so although I cut back quite a few dead stems of perennials I also left plenty and made a pile of mixed "materials" in a discreet spot behind the greenhouse. Dead hosta leaves seem popular and I would imagine lily of the valley too since they seem to decay back to soft wispy fibres.
My second sewing of grass has not taken. But I have arranged to cut back my neighbour's large overshadowing shrub at Easter! I also need to find someone to repair the greenhouse, fix a wobbly fence-post and need to treat the shed with wood-preserver. The list of (plant) gardening tasks is far too long to list here. Plenty to keep me busy!
Spring has definitely sprung with tulips breaking the ground, clematis and roses all shooting and a few bees buzzing around.... I'm looking forward to the early Easter.
Posted by sue in the garden at 08:49 1 comment: