A spring contrast of the self-set and highly cultivated 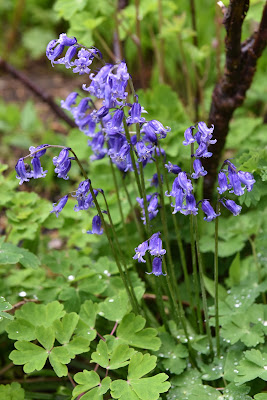 It has been SO cold lately that I have been a real wimp about getting out and busy! Even on Saturday morning there was ice on the birdbaths. Happily the self-seeders seem to thrive on neglect in any weather. This year there is a profusion of bluebells, primroses and forget-me-nots. 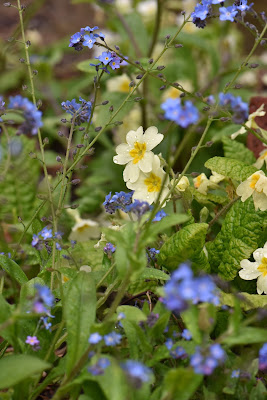 But an unusually warm bank holiday (it only rained this afternoon!) has nudged me into action. There is much to do. The area behind the greenhouse and the greenhouse itself are in need of much attention and I've decided on a radical change-around. I shall do away with the white-currant that produces hardly any, tiny fruits, the overgrown strawberries I can't eat, plant some new raspberry canes (I mistakenly pruned out the wrong ones in my haste to get in from the cold a month or so back) and make some space for a few veg. It means moving a few gems like this clump of self-set English bluebells but they do seem to be thriving everywhere this year and transplant remarkably well. In the greenhouse the dahlias are coming up nicely in their pots. A greenhouse is useful but really warrants an every-day gardener. I am looking forward to some help in sorting out the leaking roof and broken pane and then will revise it's more practical use rather than a hot general storage/junk hole!
The grass is still suffering the plant-form of alopecia, nearly 2 boxes on although at last there are signs of life. I'm sure its' germination is being inhibited by the cold. But I have not given in yet. Other things are definitely being affected by the cold. Some of my Sarah Raven Ipomoea lanata seedlings caught the frost. Luckily I kept some in a sheltered spot and am now bringing them on in the kitchen. There are far fewer aquilegias this year and some are looking yellowy and weak. A few geraniums also seem very reticent in putting on growth as do several clematis. Good jobs tulips never disappoint. 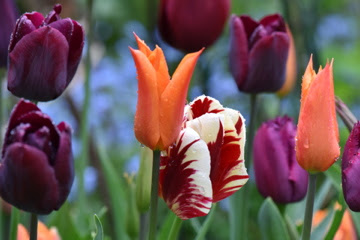 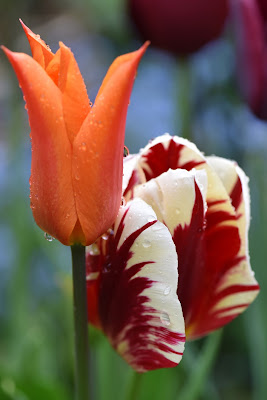 Against a background of self-set forget-me-nots an assortment of Ballerina, Coleur Cardinal, Ronaldo (or Havran?) and Curly Sue with Prinses Irene emerging. Close-up are Ballerina and Coleur Cardinal in the rain!
NB. I had forgotten what I'd ordered and some seem to be very similar so the names might be a bit dodgy!! 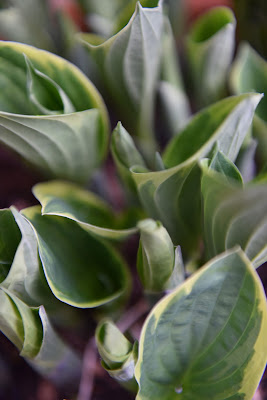 Lastly, here is a rather pot-bound Hosta Francis Williams. Such energy in its emerging spikes, so far snail-free!