Looking back and planting tulips 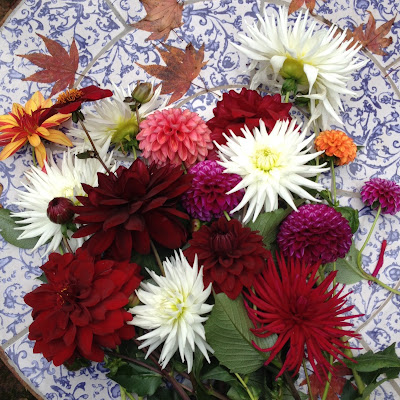 The past summer has been one of the best growing seasons since I began my garden with a great balance of sun and rain. Since I did a massive cut-back of climbers, most particularly my Kiftsgate rose (which had become very badly mildewed with attendant black spot) the grass has even grown quite well.
I grew my first ever courgettes with comparative success, a massive crop of climbing French beans var.Cosse Violette planted both in and outside the greenhouse and a very passable crop of cherry tomatoes from just 2 plants in a growbag, also in the greenhouse - all of which ripened. I had forgotten how much better they taste than the shop-bought ones!
The dahlias also performed well providing flowers for the house beyond the end of October. I picked this bunch on October 21st! Those I had left in the ground did nearly as well as the greenhouse-raised plants although some were slower to get going. I was pleased with my colour selection this year but my attention to plant-positioning left room for improvement. I need labels with pictures!
I totally missed any gardening last sunny weekend but did manage a very soggy, muddy day's cutting back and tidying during the week, lifting most of the dahlias and replacing them with tulips from Parker's as per pictures attached. In a rush to beat the weather and catch the light they went in rather randomly so the results should be interesting again! 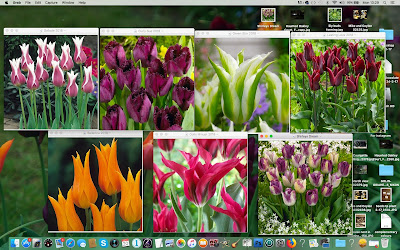