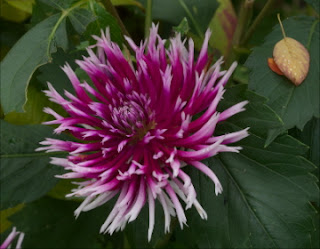 Here is one of the beautiful Clair Obscur dahlias that I managed to buy before they sold out for this season - lasting well for this time in October.   We have had no ground frosts yet but they can't be far off so I am savouring these late blooms along with a late flush of roses which I have no hesitation in cutting for the house.  With a few sprigs of honeysuckle they smell just like high summer. 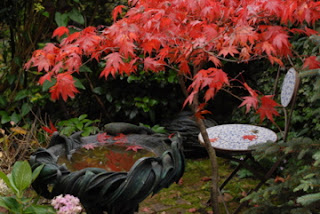 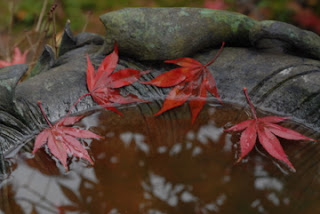 The first leaves to fall are among the most colourful - the little acer (unnamed seedling from Westonbirt arboretum) and the amelanchier.   I can't bear to sweep up the acer leaves but am trying to be tidy around the rest of the garden. 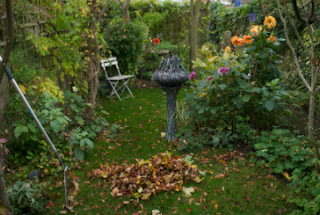 So the first autumn tints and mists have arrived in what might be my last autumn in this my first own little garden.   I may be off to pastures green - and, of course, it may never happen.   But there is as much to surprise and delight me here as ever - even though I am having to curtail my tulip bulb buying passion.
We had a really dry patch during September when many things seemed almost to stop growing.   The dahlias have been incredibly slow and some are still only just forming their first buds.   I hope they make it before the frosts.   Here are some which have made it. 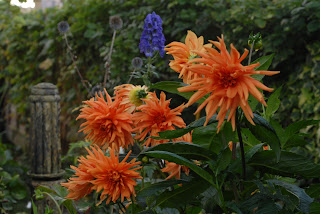 Other things which slowed up were the Japanese anemones whose flowers were really small until we had a few really good rainfalls (gardeners language!).   Here they are looking cheerful amongst the skeletal leaves of some echinops which did brilliantly again this year - attracting plenty of happy bees!! 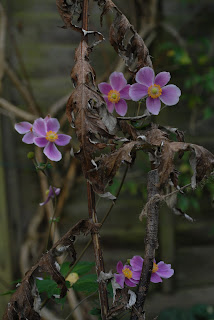 Since then we have had several thorough deluges but little harm seems to have been done.   A few things have even thrived on this seasons strange weather - particularly the fucshias. My thoughts are now turning to potting up little bits of old favourites which have multiplied so well and hopefully transplanting odd treasures.   I am jolly glad of my RHS bibles for advice!