I have been sadly remiss and up-dating this month but life has conspired to keep me out of the garden.   At least I haven't been missing beautiful gardening weather but it has been wonderful to have such delicious, plentiful rain.   If only I had got my finger out and bought that second water butt a month ago.

The garden has seen a great turnabout in the past month from looking dry and thirsty to lush and vibrant.   The tulips are a delight although I'm sure what's come up isn't what I thought I had planted.   I was sure I had planted Ballerina in front of my new bird bath - not the mysterious red fellows.   Nonetheless they make a great foil to it! 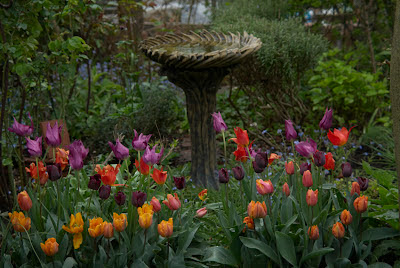 I had to work last weekend which meant my first decent stint of gardening for weeks (yesterday) was on the only cold, grey day we have had in ages.   Never mind - it was peaceful, unlike today!!   And it was very timely for setting up my new ceramic bird bath from Diana Roles.   The birds haven't got used to it yet as the water is a bit too clean but I'm certain they soon will, especially with our current drought. 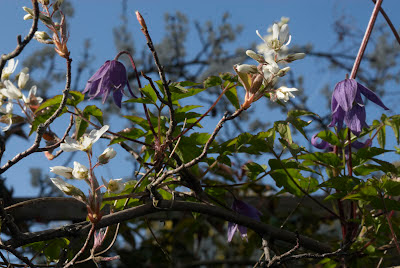 So much has been happening I can't begin to cover it all so this is an up-date on what has really surprised me - the early tulips are VERY early and with much reduced stem length and my various clematis are all over the place.

I first noticed that Cl. Minuet has layered itself further along the greenhouse so it really will cover it this year.   This is a wonderfully prolific plant which I have already propagated from its own seed.   My next discovery was that Cl. Ernest Markham, usually so hardy and reliable, seemed to be almost dead, the old stems rotten from the ground with what looked like a white mildew at the base.   But then I saw that it too has layered itself so hopefully it will begin again with its old vigour.   If not I will have to buy a new one.   It is too good to loose even though it is a bit of a thug in my tiny space.

Next notable clematis observation is Ville de Lyon - supposed to be late-fowering but already in bud.   It has never done particularly well but the few early flowers are a gorgeous deep reddy-pink (not red as advertised).

Last but not least, I have finally succeeded in persuading a Cl. Alpina to flower for me.   This beautiful mauvy-blue is harmonising beautifully with the amelanchier - just about at its best.

Oh and Charles and Diana are doing just fine in their pots!

Ordered Dahlias Mrs Eileen and Aluana Clair-Obscur this week so will be very busy potting up tubers at Easter - along with everything else.