On Saturday my bleary-eyed wander into the kitchen was greeted by the sight of 2 lively, healthy and evidently hungry blackbird fledglings bouncing around outside the French windows with both parents in eager attendance.

The garden has suddenly burst into life and with it its wildlife.   Along with the resident blackbirds - at least 2 if not 3 fledglings, all flying short distances fairly confidently - there have been plenty of blue tits and fluffy young ones, great tits - whose rather tedious call I have only just identified www.youtube.com/watch?v=3nDLF2fxoWQ - green finches, dunnocks and robins.   Nowadays there are always red kites on patrol overhead and while I was clearing last years dead leaves I disturbed a fairly large and very splendid frog.

The snails have also started waking up and have managed to chomp the tops of all my shooting dahlias in the greenhouse.   Apparently it's due to be a bumper year for slugs and snails after all the rain we had last year.   One can only hope this is good news for thrushes, hedgehogs and the like. 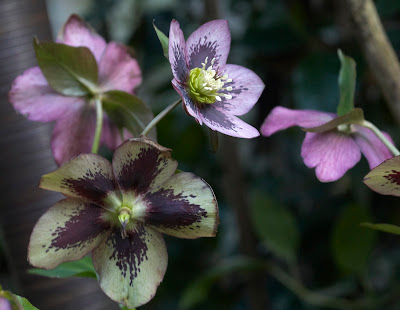 It's just such a relief for the temperature to be back in double figures and this week the garden's had a thorough drenching - the first rain in several weeks so very welcome.

The hard winter may have been detrimental to we poor humans but it looks like it's done the garden some good.   My hellebores have flowered better than ever before, the blooms lasting longer and several things - including pansies - seem to be thriving, perhaps benefiting from pests and diseases being killed off by the cold...?

Managed to pot up some dahlias (from Wilkinson's) in the greenhouse and give the grass another thorough raking over,  removing a lot of moss before re-shaping it - mainly by giving in to the plants which have been overshadowing it and causing the moss problem.   Not quite satisfied with the curves I have created but it makes a change.

Lots of things bursting in to life - mainly with a yellow theme for now - including forrsythia, mahonia, primroses, daffs and yellow epimedium.   Clematis armandii is well on its way.   It seems spring is finally here at last - hoorah!
Posted by sue in the garden at 14:12 No comments: