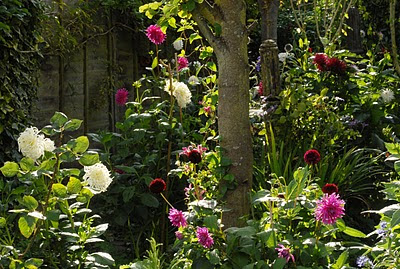 Just about all the dahlias are in flower now (except The Baron), so I have been reviewing my selection.   In terms of height I think I have made better choices although the intermittent harsh rain and winds of the past couple of weeks have proved my staking to be inadequate.   Several times I have found plants flattened to the ground but luckily they all seem to have survived.   The trouble is, I hate seeing plant stakes.   I will have to invest in an improved system for next year - even if it's only a really good batch of tough twigs from the cob nut tree when I take it down.

In terms of colours,  I have been a bit too subtle - for me.   There are rather too many whites - nice but a bit too sober - and I really need a complementary note to the pinks and reds, preferably a rich orange somewhere.    Could do with some really good mauves/purples too.    Jura has turned out to be a bit too much like last year's Hayley Jane and I was really disappointed that Rose Cottage nursery never replaced the 2 of 3 The Baron which failed to grow.   I hope it was just an oversight on their part.   I will remind them of it if I order from them again.   Otherwise the dahlias are a cheery bunch.

Object lesson for 2012 - be a bit bolder and order earlier!

I will be posting pics of the individual varieties in due course....

In the "working patch" behind the greenhouse I was astonished to find a second crop of strawberries coming.  Must protect them from the huge slugs which have been appearing for the last fortnight.   Have just made a crumble with some of next door's lovely apples and 4 small stems of rhubarb I thought I shouldn't waste.
Posted by sue in the garden at 17:01 No comments:

I came down this morning to see part of the cob tree wildly thrashing about in a manner which reminded me of my first sighting of a beaver in France who had given himself away by frantically waving a small sapling from side to side as he battled to break it off.   He succeeded before promptly plunging into the river with it.  What a delight!

The squirrel activity was not so heartening.   Regardless of the time I rushed down the garden clapping my hands and shouting shoo and soon came face to face with the creature about 8 feet above my head.  For what seemed like minutes we stared at one another before finally he gave in and - still clutching a cluster of nuts in one paw and hissing and chattering - he hurtled off into the Judas tree before a rather ungainly leap onto the fence and off.   I am pleased to say he does not seem to have been back today!
Posted by sue in the garden at 18:48 No comments:

Cob nuts or no cob nuts?


An article in this week's Metro answered my question about whether my tree is a hazelnut or cob.   It's a cob.  But my disquiet at the thought of cutting it down and loosing the lovely harvests of nuts was rather settled last night when I went down the garden to find shredded cob nut calyxes and nutshells all around.   A squirrel - or more! - has beaten me to it.   (I know it's squirrel damage rather than mice as they simply tear the whole thing apart and bite into the shell any old how.   Mice do it nice and neatly making a little round hole - goodness only knows how.   I don't have an issue with the mice - they are not so greedy! 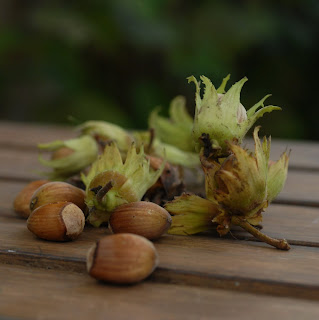 The weather forecast actually correctly predicted a fine day yesterday and I really made the most of it with a thorough tidy up in the garden.   The new grass seed I put down has taken really well - although I realised the very strong growth underneath the bird feeder is actually a very dense crop of wheat!  Still, it blends in well.

Put more Miracle Grow on the dahlias, planted a grow-bag in the greenhouse with assorted salad leaf crops, picked a reasonable bowlful of delicious autumn raspberries and collected the first hazel - or cob nuts - I still haven't figured out which.   They are quite hard to find amongst the dense growth but worth the effort both to eat and also to limit the number of saplings which emerge each spring.   I must have pulled up about a dozen this year....

The best part of the day was early evening,  settled with my book and a glass and reading until the dusk became too dense to read.   Good job I made the most of it.   This morning we got absolutely drenched shooting in woods.   It reminded me of the jungle rain storms I had been reading about in Ingrid Betancourt's book about her captivity in the Colombian rain forests "Even silence has an end".   It smashed a few dahlias but I am surprised how fresh the garden is still looking for late summer. 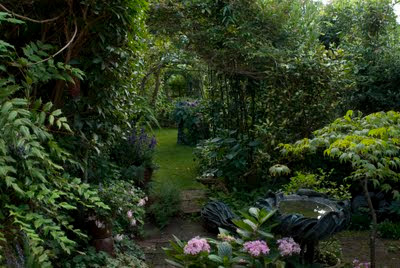