Hasn't it been? September with its rain and the recent Indian Summer have given me plenty to keep on top of this year - hence the dearth of posts. Since it's gone back to "normal" now, I'll try for a brief catch-up.
Firstly, this year has proved great for dahlias. Again the pot-grown tubers have outshone those I left in the ground to overwinter but they have almost all flowered with varying degrees of success although the verdict is definitely that in a small garden like mine where space is so restricted, it's worth starting everything in pots to make the most of it. Maybe I will give away this year's tubers to those with more space - or good dry overwinter storage! (Any takers?) 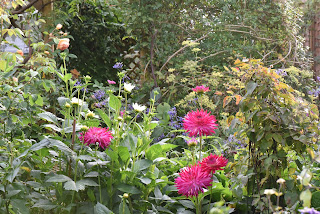 In spite of my initial misgiving, I had mixed varieties fairly well, the dominant hues being through deep crimson through to magenta-white and mid-pink with a few whites and an over-wintered yellow thrown in to shake things up a bit! Daniel's Favourite is a new one to me - almost the opposite of Hayley Jane. Great,strong plant - love it. 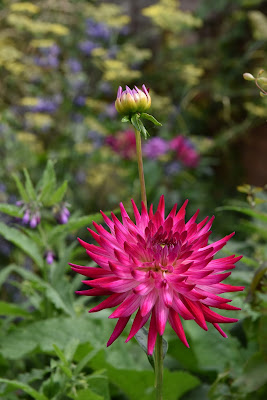 Another things that's been (more than) plentiful this year is earwigs. There seems to be at least one fall out of every bloom I cut for the house - hence much chasing them round. They seem to have a strong preference for white blooms, so much so that I have spent a lot of time picking them off as they seem to think that sticking their heads in under the petals hides their tails - a bit ostrich-like maybe! Like lily beetles they also seem a bit dim about camouflage! 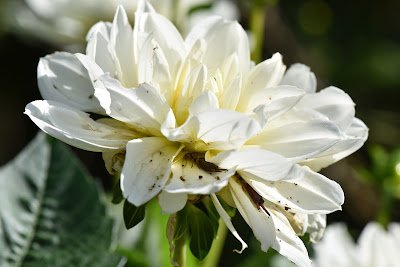 In addition to eating the petals, they make a nasty mess with their detritus. However, I think I saw a hedgehog's droppings nearby the other day so maybe there is something positive to come from this!
Posted by sue in the garden at 17:30 No comments: